Dan Cantrell is an Emmy award winning composer and multi-instrumentalist known for his innovative film scoring approach, and his virtuosic abilities on the accordion, piano and musical saw.

Dan’s compositions for film and television have earned him numerous awards including an Emmy Award for KQED’s Home-Front, a Golden Gate award for the soundtrack to the documentary Divided Loyalties, and an Annie nomination for his work on three seasons of Cartoon Network’s the Marvelous Misadventures of Flapjack.

His Orchestral music was recently featured by the Oakland Symphony, and his chamber music was performed at San Francisco’s Yerba Buena Center for the arts, and in Washington DC’s Kennedy Center.  Dan also recently composed a suite of choral music performed by the Oakland Interfaith Gospel Choir as part of their yearly concert series. 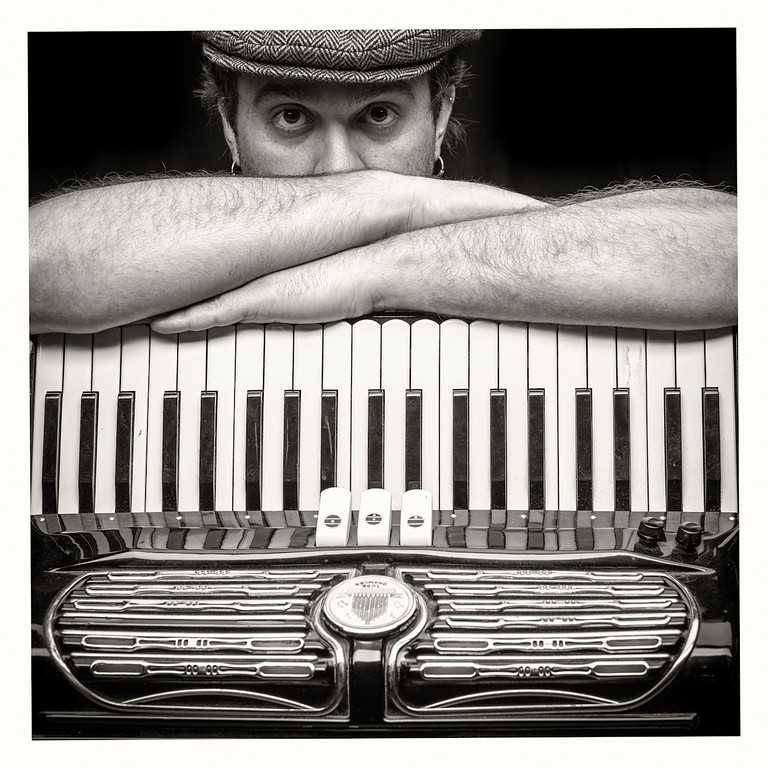 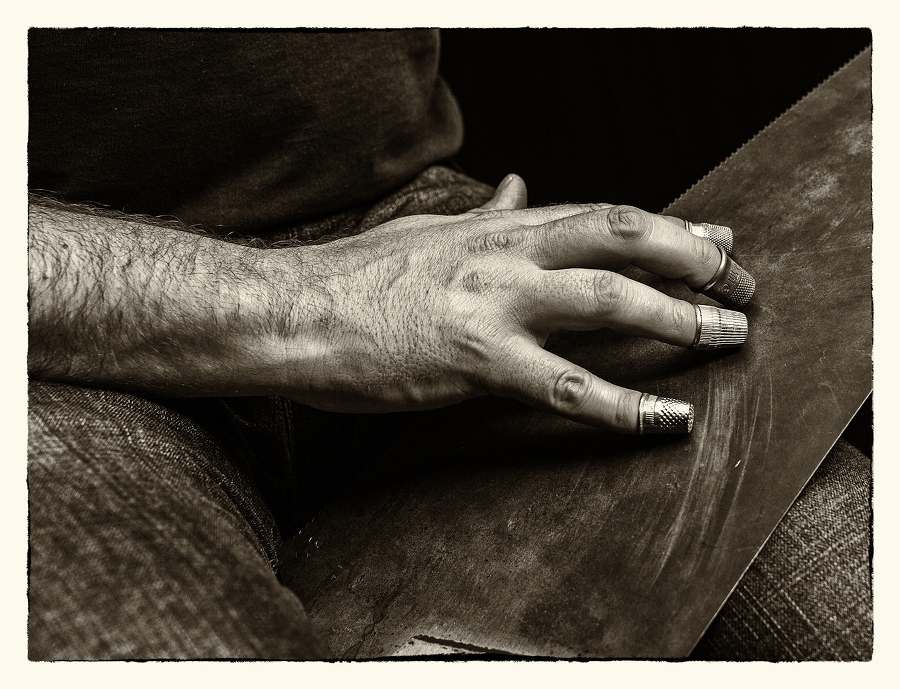 Dan is appreciated by directors and collaborators for his collection of odd instruments from around the world, his love for the idiosyncratic and flawed beauty found in live acoustic performance, his exploration of haunting and mysterious ambient sound textures, and a proclivity for experimentation with arcane recording techniques. His resulting compositional artistry supports hundreds of cinematic works and performances.

A impulsive decision in his teenage years lead him to buy an accordion in a thrift store in Hemet, California.  From that fated day, he pursued the instrument, learning in schools, music camps and eventually traveling to Eastern Europe to learn from Bulgarian Macedonian, and Turkish Romani masters.

Dan has now emerged as one of the most well known living American accordionists.  His unique sound can be heard on the albums of Tom Waits, Joanna Newsom, and Beats Antique, in Major Motion Pictures such as Mean Girls, and The Tiger and the Snow. 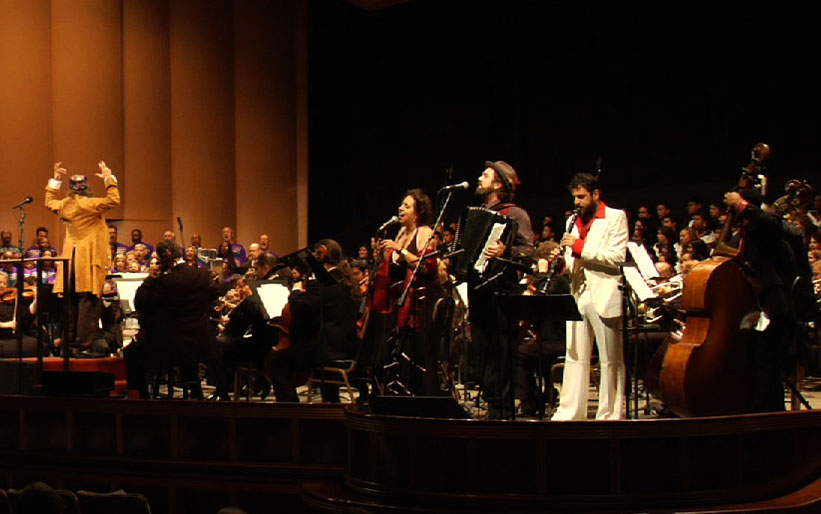 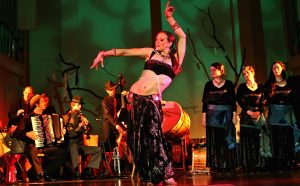 Dan has also collaborated extensively within the medium of dance. He has composed and collaborated with Canada’s Royal Winnipeg Ballet, San Francisco based ODC dance, Ballet Afzaneh, FACTSF, his wife Elizabeth Strong, UltraGypsy belly dance, as well as international touring shows such as Bellydance Superstars, and Bellydance Evolution.  He has created innovative dance shows such as Waxing Cinematic (A two act musical dance drama integrating shadow puppetry and projections), The Cabbage Sellers of Haities (a dance based theatrical musical based on Diaspora culture in 1920’s Greece in the emergence of Rembetico music) Miriam’s Well, and Madre (a theatrical setting of music and dance from Ladino roots).  Dan’s music can also be heard accompanying individual choreographers and performers such as Rachel Brice, Kami Liddle, Zoe Jaques, Miriam Perez, Mardi Love, Mira Betz, and Samantha Emanuel on stage and in film.

Dan Cantrell is an Emmy award winning composer known for his innovative and evocative film and theatre scoring approach, as well as his virtuosic playing abilities on the accordion, piano and musical saw.  He holds a BFA degree from CalArts where he majored in Composition and Piano performance.  Dan is a self taught master of the accordion, excelling at Balkan, Romani, Eastern European, and Klezmer styles.   In recent years, Dan has performed and recorded with Tom Waits, Joanna Newsom, Beats Antique, Bono, Danny Elfman, members of the Klezmatics and Fishbone.  Dan’s broad ranging musical portfolio, including compositions for video games, cartoons, film, television, web broadcast, and self produced albums can be heard at www.bellowhead.com

Born in 1976 and raised in the sunny beach town of Encinitas,California, Dan had access to a wealth of musical education and inspiration. Dan studied piano at an early age, also dabbling in electric guitar, upright bass, tabla, and digerydoo. He began composing at age 11, mostly to avoid practicing written classical music.  Soon after, encouraged by his parents, and piano teacher Elenore Giacoletti, he began winning composing competitions, writing for small ensembles, solo piano, and in bands.
ISOMATA, (Idyllwild school of music and the arts), was an amazingly supportive and nurturing environment where Dan was allowed to develop his voice as an artist, and find himself as a young person.  Surrounded by the natural beauty of the San Jacinto mountains, he was introduced to the music of Bach, Satie, Debussy, and Bartok by his piano teacher Nelms Macelvein.  This music appealed to Dan as a pianist, but also sparked his interest in the tonalities and rhythms of eastern Europe and the Middle East.  Another deeply inspirational professor at Idyllwild Arts Academy was Marshal Hawkins, a passionate teacher and actively gigging bassist who introduced Dan to jazz and improvisational music, and changed his view of music forever.
At The California institute of the Arts (CalArts), Dan flourished as an artist and collaborator.  He pursued a double major in Composition and Piano Performance, graduating with a BFA in 1998.  Notable among his many influential teachers were Brian Pezonni, who taught him piano, improvisation, and kindly let him tag along to major motion picture scoring sessions, Paul Novros, Charlie Haden, John Bergamo, Leo Smith, Nick England, Susan Allen and Vinnie Golia taught him jazz, improvisation, and music fundamentals.   He studied composition with Mel Powell, and Alan Chapman, and studied Balinese Gamelan and Kechak with I Naomen Wenten.
Collaborating with Filmmakers, animators and dancers at CalArts, Dan took a great interest in composing and collaborating with other art forms.  He composed music for animation, film, dance, and theatre while also taking time for multimedia spectacles from ironic Prom celebrations, to Chili Cookoffs, to mysterious aquatic multi-media concerts in the main gallery.
Dan also met long time friend, band mate, and colleague Ryan Francesconi playing in the Vernicious Kinids, (a Bungle-esque high art Punk show laced with Circus arts and questionable mayhem).  Immediately thick as thieves, Ryan and Dan would become the two pillars of The Toids, a high energy original music ensemble that drew influence from Eastern European traditions and performing with lightning speed and precision.
Flying high after his first experience at Balkan Camp in the Mendocino Woodlands, Dan moved to The San Francisco Bay Area where he worked as a composer, musician, (and occasional shipping clerk).   In response to the success of the Toids and the blossoming Balkan Music scene at the time, Dan and Ryan Francesconi created the record label Odd Shaped Case, to highlight genre bending and tasteful new directions in Balkan Folk music, modern Romani inspired dance music, and Jazz Fusion.  Among the many albums released on the OSC label, were pioneering contributions from the Toids and Peoples Bizarre, Film Soundtracks such as Divided Loyalties, and record albums from ensembles that Dan played and composed for.  Dan also became a founding member of Xenology, a licensing library featuring a unique blend of boundary pushing composers all fluent in the vernacular of world music shaped by modern modalities and electronics.
Just after his 21st birthday, Dan flew to Albequerque New Mexico to create a whole season of Mark Kistler’s Imagination Station as a sunglasses wearing musical side kick and musical director.  He got his start scoring professionally at the San Francisco based animation company Wild Brain where, in two short years, he began working as a runner and left as a house composer and music director.  Dan went on to compose music for content on Cartoon Network, Nickelodeon, Disney TV, MSNBC, PBS, KQED, and well as for many other independent companies and artists in Los Angeles, Chicago and San Francisco.  He received an Emmy Award for his score to Home Front, and the Golden Gate award for his work on the documentary film Divided Loyalties.  In 2005, Dan began working on the Marvelous Misadventures of Flapjack, a cartoon series directed by Thurop VanOrman, and produced by the Cartoon Network.  The amazingly humorous and slightly disturbing show ran for three seasons and received Annie and Emmy awards for excellence.
Dan performs and tours regularly with several ensembles including Beats Antique, Inspector Gadje, Kugelplex, the Toids, and various original projects he directs.
Dan now lives in Richmond, California, where he works as a freelance composer and musician. His current projects include an entire album of eccentric compositions for musical saw and a debut collaboration with Gamelan Sekar Jaya featuring new work for piano and Balinese Gamelan.